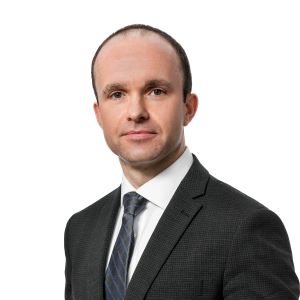 Solicitor
How Can I Help?

Robert Dooney is an Associate Solicitor in our Employment and Litigation / Dispute Resolution team.

Robert joined SOR in 2013 having worked previously in the legal and compliance division of Bank of Ireland before working for several years with a top five law firm in Dublin.

Robert advices the firm’s corporate clients on a wide range of Employment Law matters spanning all legal issues in the Employer/Employee relationship, including reorganisations and disputes, unfair dismissal, as well as workplace bullying and harassment cases.
Robert is very experienced in dispute resolution and litigation and he manages and advises on a wide variety of high-value contractual including advising on disputes involving insurance companies, solicitor firms, businesses in the aviation sector and in the retail sector. Robert also advices on environmental law. Robert also specialises in debt recovery, using pre-legal methods through to litigation to recover debts.

Robert qualified as a solicitor in Ireland in 2014 and has a BA and an honours LL.B degree from the National University of Ireland, Galway.